Granite City Comic-Con 2017 was our third annual convention, bringing together talent from all over the globe. Hosted at the Doubletree by Hilton Treetops Aberdeen Hotel, we packed so much into a May weekend that even we struggle to remember everything that happened – but that won’t stop us trying…

It was by far our most ambitious event to date and we want to thank each and every one of you that played a part in making it as special as it was. It goes without saying that all the staff at the venue went above and beyond their expected duties and fully embraced the comic-con as their own event. To everyone at the Treetops, you have our eternal gratitude. The army of volunteers (Meeseeks with their caaaan dooo attitude) who were there before, during and after the event, you are truly worth your weight in gold pressed latinum. Our Cosplay Queens who teamed up with Cos-Con to bring a superb weekend full of costuming fun, inspiration, “How To’s” and participation events all culminating with the masquerade and championship on Sunday afternoon.

Our many attractions were a joy to behold. Fan favourites from last year Dr Sketchy returned to encourage those who wanted to try their hand at drawing. The team from Wrestlezone were a great draw with their death defying moves and adrenaline pumping matches – they barely made it to the ring for the first match after a heated debate broke out at the end of their panel on Sunday. The truly beautiful marvels of engineering in the form of the A-Team’s GMC Van, Starsky & Hutch’s Gran Torino and Michael Knight’s KITT were proudly on display by Celebrity Car Hire. Hearing the Gran Torino starting up and pulling away from the hotel was a heart stopping experience. Gaming was covered on the first floor in a multitude of ways. Traditional table top, board games, collectable card games and miniature skirmish games were all being enthusiastically demonstrated by the fantastic ABZ Games. Next door to them we had the absolutely astounding Retro Computer Museum who brought 20 different retro gaming machines from through the years with full gaming catalogues on each – they were all as good as we remembered (and just as difficult). We also have to mention the wonderful costuming groups that attended and interacted with the attendees over the weekend. Both the UK Colonial Marines and the UK Garrison represented the Aliens & Star Wars movie franchises impeccably and the UKCM stand was a dream come true for prop builders and costumers alike. Nick from North East Fight Crew was even on hand to show budding jedi and duellists how best to safely and effectively perform with your prop light sabres and swords.

We were delighted to bring Steve Blum and Mary Elizabeth McGlynn across to Scotland for their first visit. The voice acting behemoths were both truly awe inspiring and giving of their time to host a Q&A panel on both Saturday and Sunday. Michael Henbury, Gerald Home and Peter Roy were all true gentlemen, recanting tales from over the years (which we swore would never leave the room) and some of the best puns we’ve experienced. Of course, it wouldn’t have been a Comic-Con without a wonderful gathering of Comic Book creators. John Wagner, Glenn Fabry, Ryan Brown and Gary Erskine were on hand all throughout the weekend imparting great insights on how the industry has changed over the years for the better and for the worse.

A special nod to the sponsors of our 2017 event, to which we owe a lot. Thank-you Books and Beans, Cineworld, Baguette Noir Press & Red Bairn Photography

And of course, it wouldn’t be an event without our attendees. Thanks again to everyone that came along and played their part by enjoying the weekend, that’s what really keeps us going and inspires us to try even harder for our future events.

Don’t believe us? Why not read some of our reviews.

“I went to the first granite con and it’s amazing to see it grow over the years, it’s just getting better and better! One of my favourite cons and I imagine it will be for some time to come“
– C. Anderson

“We had so much fun!! Our daughter was in awe of all the costumes, and the artwork and crafts people were selling were AMAZING! Definitely worth checking out.”
– S. Fisher

“fantastic event, my son thoroughly enjoyed himself, everyone was so nice”
– D. Walker 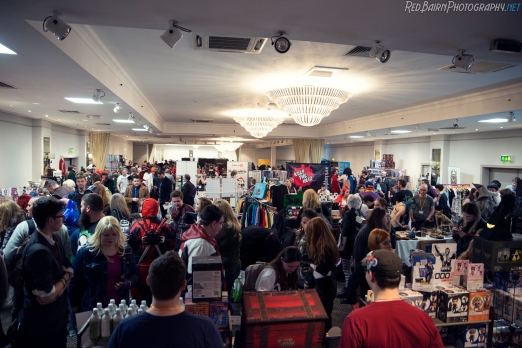 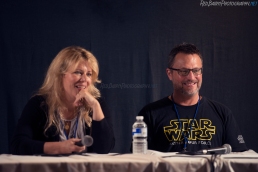 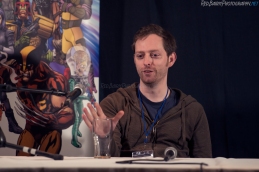 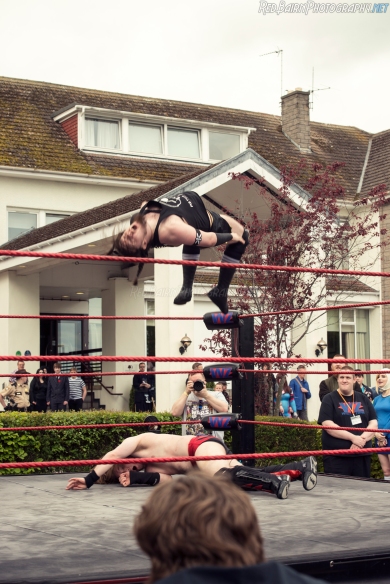 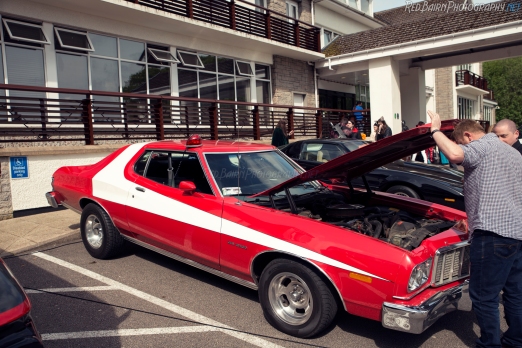 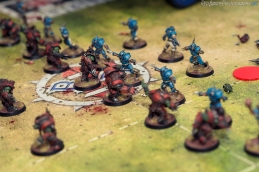 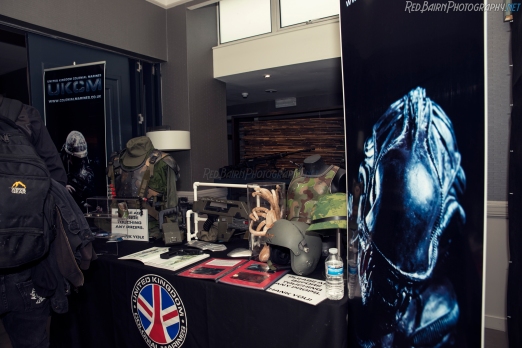 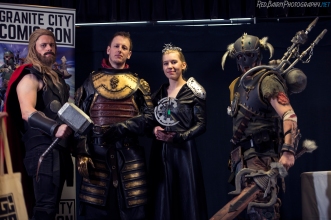 To say that Steve has had a prolific career in animation, anime and video games would be a massive understatement. With roles in Cowboy Bebop, Naruto, Star Wars Rebels, The Legend of Korra, Wolverine and the X-Men, Transformers: Prime, Ultimate Spider-Man, Ben 10, Batman: The Brave and the Bold, Boxtrolls, Teenage Mutant Ninja Turtles, Ghost in the Shell, Call of Duty and Metal Gear Solid… 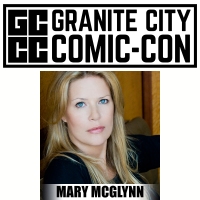 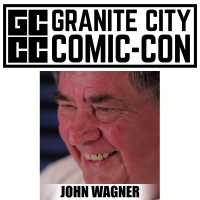 As well creating Dredd, John brought Strontium Dog and Al’s Baby to the pages of 2000AD for many years, John also worked on various Batman comics with long-standing writing partner and GCCC 2015 guest Alan Grant, as well as a number of licensed titles such as Doctor Who and Star Wars for Dark Horse. In 1997 John wrote A History of Violence, which was later adapted by David Cronenburg for screen. John’s most recent comic – Rok of the Reds, a new collaboration with Alan Grant published by BHP Comics – has been described as ‘…a joyful blending of sport and Sci-fi…’

Glenn has enjoyed a prolific 30 year career in comics, and is an Eisner Award winner many times over. Probably best known for his work as a cover artist, Glen provided the iconic covers for critically acclaimed books Preacher and Hellblazer (both recently adapted for TV); as well as covers for DC, Vertigo and 2000AD. 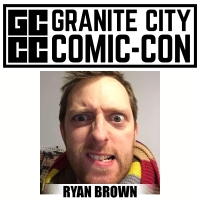 Michael is best known for his role as Taboo the Ewok in Return of the Jedi, and as Gringotts Goblin in Harry Potter and the Deathly Hallows. Michael also starred alongside David Bowie in the Eighties classic Labyrinth, and was Warwick Davies’ stunt double in Willow; he is a very popular regular on the convention scene. 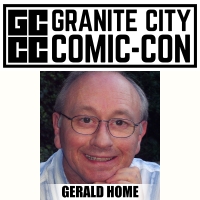 Gerald played Tessek (Squid Head) and the Mon Calamari Officer in Star Wars: Return of the Jedi. He also worked on Little Shop of Horrors and Spitting Image as a puppeteer, and has acted in many other TV, film and theatre productions. Gerald is perhaps best known for playing Mr. Muscle in a long running series of TV commercials. 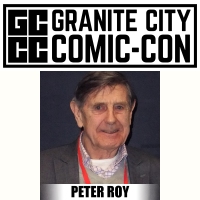 Peter has acted in numerous fan favourites over the years including – Star Wars: A New Hope, The Empire Strikes Back, Return of the Jedi, Dr. Strangelove, Blake’s 7, Doctor Who, Harry Potter and the Order of the Phoenix, Skyfall and many, many more.

Peter himself has stated that he has appeared in more than 2,500 films and TV shows during his career!

The Retro Computer Museum is a registered charity dedicated to the benefit of the public for the preservation, display and public experience of computer and console systems from the 1960’s onwards.

We hosted 20 separate machines over the weekend for everyone to relive their fond childhood memories and experience gaming from a different era. 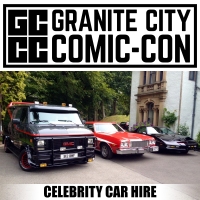 We had the mighty GMC van from The A-Team, Starsky & Hutch‘s Gran Torino and the wonderful KITT from Knight Rider. The team from Celebrity Car Hire were on hand to show you around the vehicles and answer all those questions you had about your favourite cars from TV. 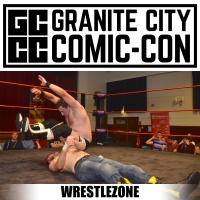 WrestleZone Scotland is the East coast’s premier wrestling promotion. Based in Aberdeen, Scotland, they host family-friendly wrestling events across Aberdeen City, Aberdeenshire, Moray and Angus bringing together some of the best wrestlers in Scotland. Stars such as “Red-Haired Warrior” Scotty Swift, Bryan Tucker, Blue thunder and many more can’t wait to be part of next year’s event, bringing the high-octane, body-slamming action that is now a staple in the North-east.

Founded in 2000, the UK Garrison is one of the foremost Star Wars costuming groups in the UK, supporting charities like the Make a Wish Foundation and the British Legion with their expertise in cosplay and prop building. The UK Garrison are part of the worldwide 501st Legion of Star Wars costumers. 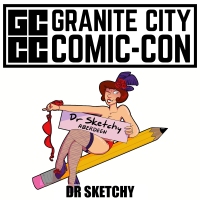 If you’ve ever fancied trying life drawing with a little twist, these are the people to come and see!

Dr Sketchy brought performers from around the country, and welcomed all skill levels of artists to the table whilst providing any materials needed to create the many masterpieces produced over the weekend.